On March 21st 2013, 21212 hosted a session focused on “High Impact Tech Startups” at GEC with Endeavor. The event was packed with discussions that gave an in-depth look into the growing entrepreneurship scene in Brazil. The following is an abridged version of the event focused on the parts that featured 21212 entrepreneurs. 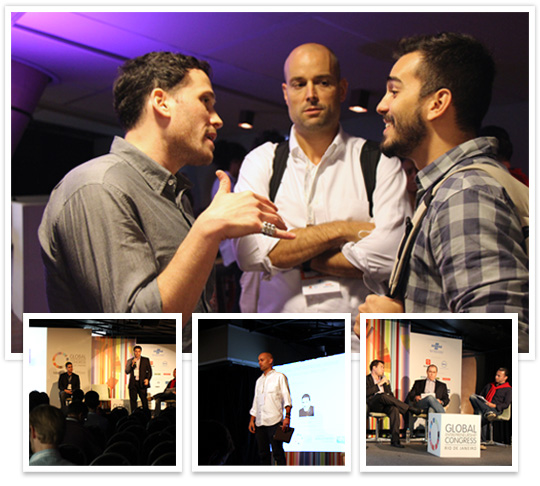 The “Education Revolution” panel, which discussed the rapid growth of online education in Brazil, featured Diego Alvarez, from EasyAula, Marco Fisbhen, from Descomplica!, and Claudio Sassaki from Geekie. The panel brought attention to the changing role of professors with the rise of EdTech platforms. Claudio Sassaki pointed out that the professor is evolving from “someone who transmits content to someone who is the owner of content.” Diego Alvarez added that online platforms enable professors to receive proper feedback from students, which, in turn allows them to give more personalized attention to students’ weaknesses. However, as pointed out by Marco Fisbhen, “professors will not be willing to accept the changes” despite the obvious benefits. Fisbhen continued to explain that unless professors recognize advantages of technology in education, such as better time management, higher quality feedback, less work and more productivity, education professionals will simply reject this technological advancement.

The topic of the next panel was ‘collaborative consumption,’ a business model based on the idea of a sharing economy that connects buyers and sellers on peer-to-peer marketplaces. Moderated by Simon Olsen from Google, the panel also featured Felipe Continentino from Queremos!/WeDemand, Christian Gesner from AirbNb and Gustavo from WeDoLogos. Simon posed the question, what are the main differences with collaborative consumption in Brazil and the US? For Felipe, the US presents a well-established concert industry with numerous venues throughout the country, whereas, Brazil is rising to that position now. Christian commented that AirbNb, an online community marketplace for booking places to stay for travel, was originally hesitant to expand to Brazil due to the lack of trust. However, after opening here they saw the country’s high potential because of the unique openness and hospitality of Brazilians.

The next panel focused on the growth of Brazilian Financial Tech startups which apply technology to financial services allowing consumers to do a range of things more effectively like earn investment returns through peer-to-peer lending and manage income. Leading the panel were participants such as Márcio Campos, from PapPop mobile payments, Arley Mora, from ZeroPaper, and Guilherme Horn from Órama. These experts highlighted the importance of customer feedback when implementing technologies in Brazil. Arley, whose startup helps control finances for businesses, emphasized the importance of educating customers and learning from them in the process. Guilherme commented that in the case of Órama, one of their biggest mistakes was allotting too much funding in market research. Understanding the market, he explained, comes best from testing the product and analyzing feedback.

Benjamin White and Marc Ecko closed the event with a fireside chat concerning “Hacking Entrepreneurship- Jeitinho for Startups.” The talk focused on the idea portrayed by the word “hustle,” translated to “jeitinho” in Portuguese. Marc defined entrepreneurship starting from its etymological roots; it means “to undertake” in French. He described how this word has become too “culturally heavy” in comparison to the widely used terms “jeitinho” and “hustle.” We have a tendency to over intellectualize the idea of entrepreneurship which, unfortunately, keeps a broader group from coming to the table. Instead, entrepreneurship should be like Nike, a colloquial concept that everyone from the street vendor to the business executive can understand.