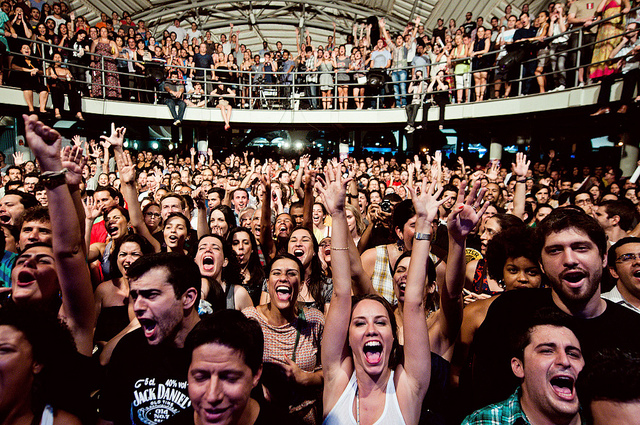 Fans at a Mayer Hawthorne concert

A few years ago, it was hard to see international, independent bands touring in Rio. A group of friends who shared a passion for music saw this problem and set out to fix it. They formed Queremos! and participated in 21212’s second acceleration program. Two and a half years after their launch, we are blown away with their success. They have brought bands like Two Door Cinema Club, Feist, Miike Snow and LCD Soundsystem to Brazil, empowering fans and elevating the independent music industry.

One of the best parts of it all is how they are achieving this success. Queremos! hosts an online crowdfunding platform where fans can choose an artist and the city where they will perform. In order to fund concerts, they sell special WeDemand tickets ahead of time and if they reach the minimum threshold, the concert is planned. If the show is sold out, anyone who bought a crowdfunded ticket is refunded and attends for free. If they don’t sell enough to fund the concert, everyone gets their money back.

In the past few months, Queremos! has expanded to New York and Los Angeles with the name WeDemand!. Their success is already spreading at a rapid pace. They have held concerts in San Francisco, New York and Boston. They were finalists at the TechCrunch Battlefield where they were called the “kickstarter for concerts” and even Snoop Dogg has been caught by their charm! He tweeted this week:

“This iz dope – if u get enuf homies to vote for it u can get a show in ur hood – http://www.wedemand.com” @SnoopDogg

We were eager to hear more details so we stepped across the street to our alumni office to talk with the team.

Q: How is Queremos! changing the independent music industry in Brazil?

A: We are giving people the idea that they can make things happen and, at the same time, crowdfunding is growing in Brazil. Three years ago, this kind of show was not really happening. No international, alternative, medium to small bands came to Brazil because of the cost, unstructured market and unpredictability of ticket sales. In the past 2 ½ years we have had more than 40 concerts, we really gave a shake to the market.

Q: What are some of the main differences you are noticing between the Brazilian and American market?

A: The US has a very scalable and well-established market. Take any main city and there are multiple venues prepared and looking for artists to perform. There are more cities than dates to play! There is also huge community of university students who we want to start spreading the word to. In Brazil, the independent concert industry hasn’t been around as long but it is growing and getting more established every day. New venues are opening up around the country, bringing more structure to the market and more opportunities for artists to perform.

Q: Coming this April you will be launching the new “Backstage” area of your platform. What new features will the backstage have?

A: The backstage will be an area where promoters can create their own crowdfunded events. There will be a metrics section where promoters can analyze how popular artists are relative to each city in order to get the best idea of where to plan a concert. They can also map out specific details like WeDemand ticket price, amount of tickets to be sold, concert venue, date, etc. It is a business to business platform where the artist, venue and promoter can close deals online.

A: A famous Brazilian musician called us one day asking for free tickets to one of our concerts. Normally in Brazil, this is no big deal, he gets the free ticket because he is VIP. But since our concerts are crowdfunded, we had to say no, we need people to buy tickets or the show may not even happen! After learning about how we work, he bought tickets.

Check out this video with more details about WeDemand!/Queremos!